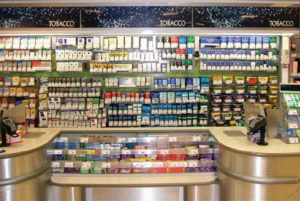 This briefing provides information on the tobacco point of sale display ban, why it is needed, implementation dates, and evidence of what has occurred in other jurisdictions that have implemented a similar ban. This page provides an overview, but for a fuller explanation which includes references, please download the ASH briefing on tobacco point of sale display regulations.

Since the ban on tobacco advertising in the UK in 2003, tobacco companies have become increasingly reliant on displays at the point of sale to draw attention to their products and stimulate sales. Evidence shows that children are more likely to smoke if they are exposed to in-store tobacco marketing (more on this in the ‘reasons for a ban’ section below).

Background on the legislation

The Health Act 2009 was introduced following a widespread consultation on the future of tobacco control that received over 100,000 (mostly positive) responses. The Act included measures prohibiting the display of tobacco products at the point of sale in England, Wales and Northern Ireland. The Coalition Government formed in 2010 confirmed that it would implement the legislation in England from April 2012 in large stores and April 2015 in all other stores.

What the law says

Stores can display tobacco products temporarily in some circumstances:

All price lists and labels for tobacco products must be in the format set out in the law. All information displayed must use Helvetica plain font. The only information that can be given is the brand name and price of the product, although cigars can include the country of origin, dimension and size, and pipe tobacco can include the cut and type of tobacco used.

Only three types of price display are permitted:

Who is responsible for compliance?

The retailer is responsible for making sure they are compliant. Non-compliance with the legislation is a criminal offence. Any person found guilty of such an offence, including shop managers and shop workers, could face a fine of up to £5,000 and two years imprisonment.