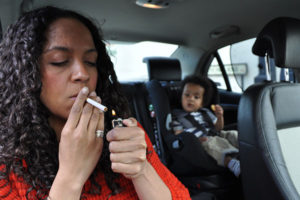 The Children and Families Act 2014 is the primary legislation making it an offence for an adult to buy cigarettes for anyone under the age of 18 – known as proxy purchasing – and also covers smoking in cars, giving the Government powers to introduce the following regulations:

The regulations to prohibit smoking in cars when children are present were laid before Parliament on 17th December 2014 and were approved in February 2015. The law took effect on 1st October 2015.

Smoking in cars with children present

The Smokefree Action Coalition supported the introduction of legislation to prohibit smoking in cars with children as this clearly reduces the level of secondhand smoke to which children will be exposed.

There was a free vote on the amendment to introduce a ban on smoking in cars when children are present which was approved by 376 to 107, a majority of 269. You can see how the MP in your constituency voted here. Prior to the vote  David Cameron, Prime Minister at the time, was quoted as saying that he thinks that “the time has come” for a new offence of exposing children to smoke in vehicles.

The Government ran a consultation on draft regulations for smoking in private vehicles from 15th July to 27th August. The regulations are based on the primary legislation in the Children and Families Act 2014.