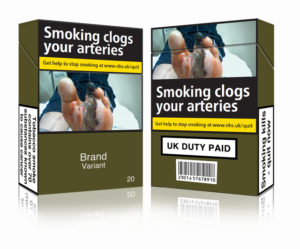 On Wednesday 11th March 2015 MPs voted overwhelmingly in support of regulations to implement standardised tobacco packaging. 367 MPs voted in favour of the measure and just 113 against. The regulations were approved by the House of Lords on 16th March and the measure took effect in May 2016 – at the same time as the EU Tobacco Products Directive came into force, introducing new rules on the size and placement of the health warnings, minimum pack sizes and so on.

Retailers and manufacturers were given a year period to move on from the old packaging before the full and final implementation in May 2017.

Member organisations of the Smokefree Action Coalition pledged their support for standardised packaging and played an active role in bringing about the new regulations.  See the Coalition briefing on standard packaging regulations for more information

Hundreds of children take up smoking every day. This is not a party political issue; it is a vital matter of child protection and public health. Putting cigarettes in standard packs has stopped the pack being used to promote the product and is helping to make smoking history for our children.

To access the full list of references, including hyperlinks, please visit this page. The page also includes a record of how the regulations made their way through parliament and a list of resources and briefings produced at the time.